This was a nice evening event mid week, on a week that I was off work, decided to make the trip up to Cheadleton, early afternoon so I could collect a few caches in the area before reaching the event.

Started off the caches for the day by collecting one in a lay-by on the A34 which i was going to pass on my way there, due to issues on the A500 a different route was taken, A34 then A520. This cache was quickly located and grabbed a coin and a Travel Bug from it.

The next stop on the journey was just outside Cheddleton at the Flint Mill Museum, after having a wander around the buildings learning about the flint and making of dyes. I quickly made my way to the cache site, an interesting hide, I initially wondered where it could be then it struck me I had container in hand and log book signed.

My next few targets were the cachers asylum series and a Cache called Mr G.E. O’cache, these were all in the Former St Edwards Hospital which has been converted into a housing estate with a mix of old hospital buildings and new builds. I parked up and headed for the former church first where Mr G.E. O’cache was located, an interesting variation of a cache this one, no physical log book but once you enter a code and your name the rasberry PI based cache takes a picture and automatically creates a log. 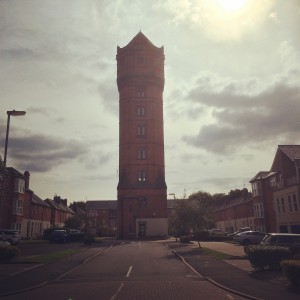 I then headed off to collect some of the cachers Asylum series starting with number 2, which i made my way down a slope then cross country to this cache, moving on following the path now to Number 3 that took some searching before i found this one. Number 1 was easily located, and after finding the right path headed for 4 and the start of the multi in the area. After much searching there was no sign of 4.

I headed back to car after this i was still a bit early for the event so popped into nearby Leek, and grabbed the church micro, then headed to the event hosted by Tuff Cookie at the “The Travellers Rest” pub. On arriving at the event I realised I had lost my wallet during my walking this afternoon, and after searching car pockets and backpack throughly no sign, after a quick call home to get the details of the lost card phone number. I headed into the event signed the log book and had drink with the change I had on me. I then proceeded to cancel my cards, only for 10 minutes later another cacher to walk in to say has anyone lost a wallet today while out caching, had lost it as it turned out on way to cachers Asylum 2 , remembered had I caught my coat on a tree there, and it must have fallen out. Many thanks to Chramm for returning it and i still owe I drink or two.

After catching up a few of the other cachers at the event some familiar faces other new faces. A few more caches were released for the event and out I went with a small group to try to retrieve these, which became more challenging as the darkness set in, with the aid of torches and phones we found these as part of “Team Travellers” The event was claimed as my 1500 find onwards to 2000.