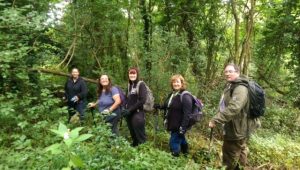 e series of caches around Lloyds Coppice near Ironbridge. The group was made up of Wild Goosey, Manxrose, Adi Adventures, Jnk Fox, WillowtheCat and myself, we headed into the series equipped with water snacks, first aid kit and bypass snippers. The first caches in the series were up the hill on the way to the entrance to the Amazon. The first difficult cache we reached was at the back of a big tree down s steep slope, Adi adventures braved the slope and the cache was soon located and signed.

The party then made its way along the footpath to top of the Coppice a couple of more caches on he way to the waypoint to the entrance of where we were aiming for, at that point we looked at each other when faced with a wall of six to seven foot high, nettles, horsetails and brambles, so i lead the way and started bushwacking our way through what must have 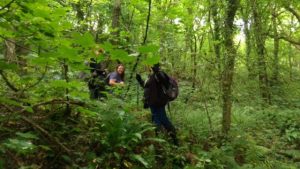 been a 40 meter belt of this before we reached the relative ease of the woodlands, no paths here all off piste, the vegetation was thick and over grown it took about 45 minutes to reach the first of the four caches hidden in this area. Once we arrived at the GZ a short search helped my the many eyes and the cache was found safe and sound.

The trek then began to the second cache and it was a bit up and down to this one and a few boggy places, some 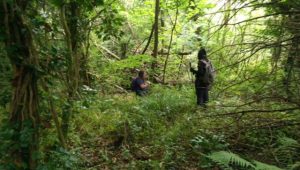 comments were made of seeing the native tribes, ewoks and other forest and jungle related movie references but eventually we reached the gz, Adi was there first and soon had the cache in hand, it was then onto the third one of the series, and this proved to be a difficult trek and there were a few slips and falls but no serious injuries other than the odd bruise and muddy clothing, upon reaching this gz i managed to fell a tree..i swear i only touched it and the tree came down, and i quickly moved out the way as it did, i son spotted the cache and it was signed by the group. 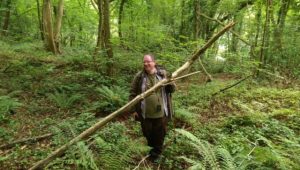 The fourth cache was the furthest away only 280 meters but it took us along time we were tiring and there were a few more steep descents here in the woods and a few more slips and trips and we had to pass through one pretty boggy area but no boots were lost, upon reaching the final GZ again it was a short search and the log book was signed. It was now time to make our exit back to one of the footpaths after consulting the gps and plotting in a waypoint we were only 100 meters or so a way but it was mainly downwards until we reached near the path and we had to traverse a deep dip then through another 5 meter thick section of brambles and nettles but we were out and those 4 caches had taken us just over 3 hours 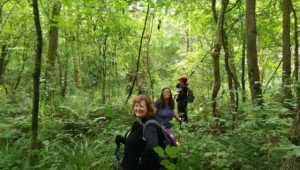 to do, we now followed the path heading back towards where the cars were parked.

Three more caches were picked up along the path and it was steps back up before we then made the decent down towards where we parked the cars near Blists Hill, a few of us then decided it was time for a well earned drink and for some a piece of cake in a coffee shop in Ironbridge. This series of caches isn’t for the faint hearted and certainly the vegetation was a hamper at this time of year the ground would have been too slippy and muddy to attempt in the wi 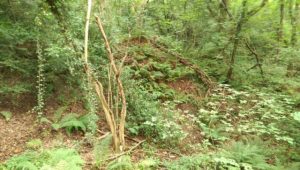